I want to take you all with me on my journey last week. It is a road that I should have foreseen when I took a job as a teacher, when I turned my education into educating. But I have to be frank, and tell you that I did not clearly see that I would one day be communicating a classroom plan to each and every one of my students as to how we would “Run, Hide, Fight”– the mantra of school shooting safety.

I want you as fellow parents, and grandparents, and citizens, and teachers, and administrators, and police officers, and lobbyists, and politicians to know what it felt like to stand in front of a classroom of students and tell them that what I want most for them when they come to school is their safety and their continued ability to earn an education that will carry them into the world as thoughtful, hard-working, problem-solving, critical reasoning, readers, writers, thinkers, and speakers who are career and college ready.

I hope it won’t surprise you that not one of my students rolled their eyes when we talked about our classroom safety plan. Not one of them asked why we had to engage in such a boring assignment, or if they could take a nap, or if we could talk about something else. None of the usual millennial stereotypes we place on this generation of youth. Yes, I get all of these non-plused reactions to the daily English concepts, learning assignments, creative activities, and formative assessments I give in my classroom. I’m not offended by this in the least. I teach high school English. It’s not everyone’s favorite subject, and six hours in a school desk could put anyone on the verge of a needing a nap. But not one mention of an out, an alternative, an apathetic reply shows you how important this topic is to our youth.

My students were keenly listening, hyper aware, compellingly conversational, profoundly questioning, solution creating, statistic gathering. I know one thing for sure– after this week-and-a-half spent discussing the ways we could best hide in silence, with cell-phones off, not a word uttered, backpacks filled with computers and books placed over our hearts as a best defense against bullets– my students want to live.

But listening to the rhetoric and the maligning of the essential questions about gun control, mental health, and school safety in our country I really have had to ask myself, “Do we want the same thing for them? Do we want my students to live?” Your faith in humanity may have shrunk a bit too at the apathetic responses from representatives, politicians, and spokespersons who upheld the status quo so unmoved by the honest expressions and questions of grief from our youth and their parents.

Why can my students see that the conversation does not logically need go to the extreme of revoking the Second Amendment, but that it would be reasonable for us to speak about universal background checks, and cooling-off periods, and training for the opportunity to buy a firearm? Why does the conversation become the fact that more people die in cars than by gun-shot wounds before we talk about banning assault weapons and making bump stocks illegal?

Why does the conversation become the idea that if guns are regulated they will no longer be available to citizens but only to criminals rather than discussing common sense methods of mental health screenings for those who want to purchase firearms? Why does the conversation become arming teachers and other militant policies that include more guns rather than examining societal support of those who struggle with conditions of mental illness? Do we worship the Second Amendment and its economic and political gains more than the principles of life, liberty, and the pursuit of happiness? Because from my vantage point this week, we do.

Because if all I have in my tool-kit is to continue to train students to duck low and move swiftly to the back of the room. That I will look out into the hall to bring passing students into our classroom the way Scott Beigel did when he was shot. That I will lock and barricade the door with a tall wooden pallet that ironically bears a peace sign. That we will break the glass in the window, hurling desks at it if need be, and exit out as swiftly as we can toward the street. That they need to run as fast as they can to the road without stopping. It feels akin to telling students to “duck and cover” in the event of an atomic bomb, with the full knowledge that all that will be left is their nuclear shadow as a reminder of their existence.

I want you to know these details because I want you to know that I want each and every child in my classroom to live. We talked in specifics. But are we as a society going to work together to ensure that safety? Now is the time that will tell. “Would you carry a gun, Mrs. Dickson?” my students asked, his hazel eyes serious, his mouth poised in a firm straight line once the question exited his mouth. He wanted to know if I would carry a weapon at school, if I would get a concealed carry permit to bring a weapon into my classroom. He didn’t ask in rancor or in pleading. He simply wanted to know what I would do to save him and his classmates in the event of a mass shooting.

What would I do? I had already asked myself this question many, many, many times from the day that the massacre happened at Marjory Stoneman Douglas High School in Parkland, Florida to the day that a student threatened the school I teach in on social media. What would I do to keep my students safe?

It was one of those moments where time took on an eternal quality– still, gaping, telescoping toward my need to answer him. “I didn’t take this job to be in law enforcement, or to carry a gun,” I replied. “You have asked me a deep and philosophical question. I do not believe in guns for the taking of human life. You want to know if I would carry a gun to protect you, but I want to know why [a teacher] carrying a gun would be our first line of defense on your behalf?”

Perhaps it felt like a dodging, ducking, pivot, a non-answer like the many politicians and spokespersons we’ve heard from this week.  Maybe it felt to him like I fractured that student’s trust. My students, who will have to trust in my coping mechanisms in the event that a deleterious person plans our death, deserve answers. But I do know my answer to his question. “No.” No, I will not carry a weapon on a high school campus.

The words Alfonso Calderon, survivor of Parkland’s school shooting, rang in my ears, “That’s a terrible idea… As far as I am aware, teachers are meant to be educators. They are meant to teach young minds how to work in the real world. They are not meant to know how to carry AR 15s, they are not meant to know how to put on kevlar vests for other students or for themselves. This is not what we stand for. We stand for small policy changes, and possibly big ones in the future. Because right now I am pretty sick of talking about teachers being armed. That is not even a possibility in my mind. I would never want to see that and neither do they want to do that.”

I care about each and every one of my students deeply. Yet when an administrator asks me “How are your kids?” like Rebecca Berlin Field, I immediately jump into my role as mother to two young boys at an elementary school that seems impossibly far, and feels unpredictably vulnerable and reply, “I was so grateful for the Principal and over thirty staff and faculty who welcomed each and every student to school today. They were standing on the curb in six degree weather when my husband dropped my boys off.” Then realizing my mistake, I quickly say, “Oh, you mean my students. They are scared.” Because this question reaches further than the doors of my high school onto elementary campuses where tiny humans go to learn and to be safe, too.

How will we protect those young students like those in Sandy Hook? I realized this week that it is my turn. If I believe that laws should change, or that monies should be appropriated in a different or particular way, or that students should be protected it is my turn to step up and voice these opinions.

It is my turn to stand beside these brave students from my high school who are looking for real and actionable change to come from the debates surrounding the Parkland, FL shooting. Small changes in national policy can lead to big changes in the safety that exists (or doesn’t) in our schools. It is my turn to be part of solutions that keep my children safe every day at school. The debate doesn’t need to be mutually exclusive, citizens can and do have the right to bear arms, alongside more reasonable regulation of these weapons. We can allocate funds for more sustained support of the mentally ill. We don’t have to throw our hands up in defeat simply because we’ve been asked to do something difficult. If I tell my students every day that they can do hard things, then I should be able to do hard things too. I hope as a parent, a grandparent, a teacher, an administrator or a concerned citizen you’ll consider speaking out on these matters. 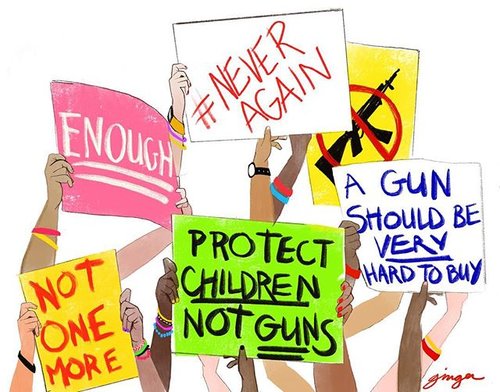